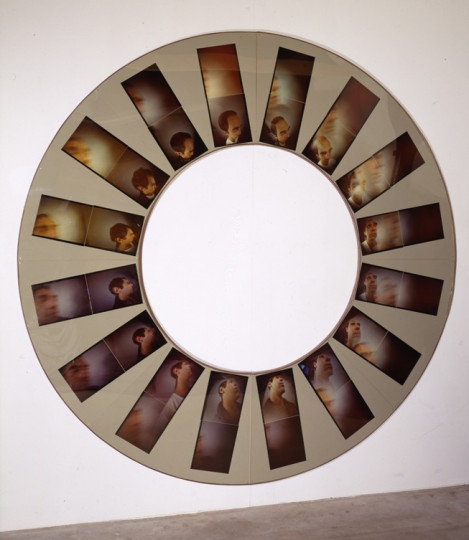 Simon Read was born in Bristol and studied at Taunton College of Art, the University of Leeds and Chelsea School of Art in London. Read’s interest in photography can be traced back to his foundation course at Taunton where John Hilliard was a visiting lecturer. At Leeds he made photographic work, but also embarked on experiments with performance art, establishing in this area many if the abiding characteristics of his later work with the camera: an interest in the work of art as an adventure whose outcome remains essentially unpredictable, a preference for process rather than finished product. As a postgraduate student at Chelsea School of Art, Read made his first pin-hole camera, returning to the examination of possibilities first suggested at Taunton – the use of photography to record the process of its own creation. On leaving Chelsea he moved into a studio overlooking Tower Bridge in London, and there became interested in the assumptions behind the operation of the conventional camera, in particular the universal acceptance of Renaissance perspective as an exclusive reality. The cameras he made at the time set out to subvert this system of planes and vanishing points, displacing the relationship of objects in space, stretching horizons, insisting on the power of the camera to mediate our perceptions of the external world. To this end Read adopted the device of anamorphosis, using slits instead of pin holes, cameras with curved or hinged backs, to contrive distortions which may be corrected only when the spectator finds and shares the view point of the camera. The first photographic pieces made in this manner were images of Read’s studio, this space providing the static secluded conditions necessary for the long exposures demanded by his cameras. But in the mid1970s the introduction of Ektachrome reversal paper set new possibilities for his work. This paper gave a positive image with no intermediate negative stage, and its greater sensitivity to light made a shorter exposure time possible, and allowed the artist to look for subject outside the studio; the very bright lights he found that he could cut exposure time to around 12 minutes, and portraiture became possible.

Photography as Medium, The British Council 1981