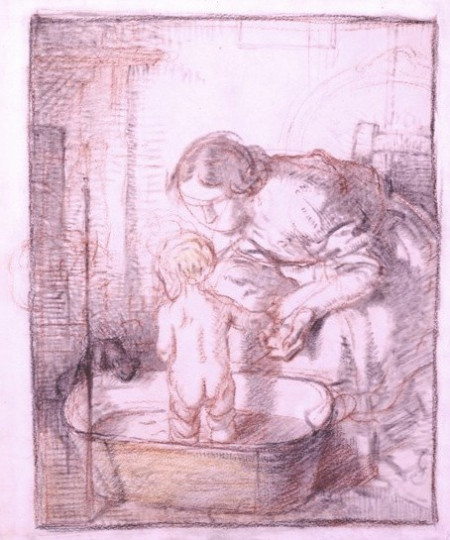 Born in Ireland, Orpen was the society portraitist of his day. He studied at the Slade School of Art, where he was a friend of Augustus John, and for much of his adult life was involved, with John Butler Yeats and John Millington Synge, in the Celtic Revival – an assertion by Ireland’s artists and writers of a distinctively Irish character in their arts and letters. He was commissioned as an official war artist in 1917, travelling to the Western Front, where he painted the battle scenes, as well as the official portraits of the military top brass, with panache and efficiency. He also took time to draw the dead and dying troops – both British and German – bringing out a more tender side to this otherwise robust and self-assured Edwardian artist. He was a gifted draughtsman (his talents winning him £20 at the age of 14), as the drawing The Bath in the Collection demonstrates. The theme of mother and child was a frequent one following his marriage to Grace Knewstub in 1901, but he was acclaimed in his day for his Kiplingesque depictions of English society (mostly male), and after the Treaty of Versailles he embarked on a commission for over 40 portraits of statesmen and generals. He was knighted in 1918.