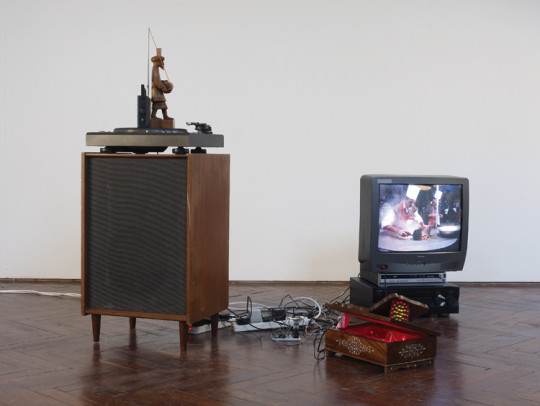 Haroon Mirza was born in London in 1977 and studied at Goldsmiths’ College, London and Chelsea College of Art and Design, London. He won the Northern Art Prize in 2011.

Mirza creates sculptural assemblages and installations that are often heard before they are seen. Using household objects such as furniture, outmoded musical equipment, lamps, LED lights and television sets, he creates works that fuse visual and aural experience. His works are often rooted in an exploration of the difference between sound and music, and previous works have included musical samples from musicians like Cat Stevens and Ian Curtis, alongside electrical sounds and rhythms generated by kinetic elements.

Taka Tak (2008) was made following an artist residency in Pakistan and epitomises many of the concerns in Mirza’s practice. The starting point for the work is a film, which features a street chef preparing the popular dish taka tak – a traditional delicacy made from mutton whose title reflects the rhythmic sound produced as the chef chops the ingredients. Other sounds are created by electricity passing through two sets of LED lights as they pulse and flash intermittently, generating a hypnotic rhythm, which interacts with the chopping of the taka tak.

Underpinning the work is Mirza’s interest in the contradictory relationship between music and Islamic culture, something often frowned upon despite the importance of the lyrical reciting of the Quran, the call to prayer and, in Sufism, the whirling dervishes who play music as a way of getting closer to God. In Taka Tak, the Quran box and Sufi warrior statue allude to these contradictions.