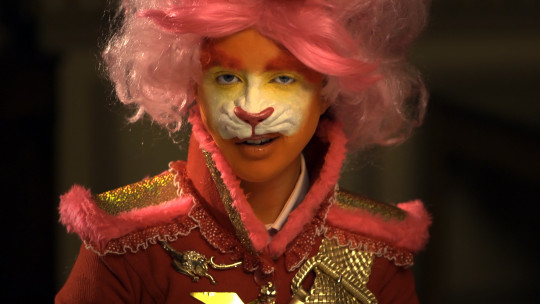 Rachel Maclean (born Edinburgh; 1987) studied at Edinburgh College of Art, University of Edinburgh. Using digital technology, Maclean constructs fantasy narratives set in computer-generated landscapes that play on thorny issues of identity, society and politics. Maclean plays each of the characters in her films, prints and photographs, wearing outlandish self-made costumes and thick make-up. She often superimposes figures onto colourful backdrops using the green screen techniques of Hollywood filmmaking and draws on existing sources found on the Internet or television.

The Lion and The Unicorn is a short film inspired by the heraldic symbols found on the Royal Coat of Arms of The United Kingdom, the lion (representing England) and the unicorn (representing Scotland). The piece uses representations of both alliance and opposition to explore national identity within the context of the 2014 referendum on Scottish independence.The video features three recurrent characters: the lion, the unicorn and the queen. These figures seem to emerge from disparate genres, including shadowy historical reconstruction, playful nursery rhyme and pragmatic TV interview. Inhabiting the rich historical setting of Traquair House in the Scottish Borders, they are seen drinking North-sea oil from Jacobite crystal, dividing up the pieces of a Union Jack cake and inciting conflict over the mispronunciation of Robert Burns.