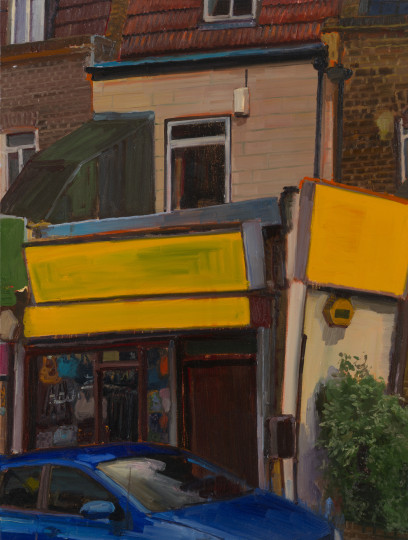 Simon Ling was born in 1968. He studied at Chelsea College of Art & Design and then at the Slade School of Art in London.

Ling produces richly textured oil paintings on canvas which focus in on details of both urban and natural landscapes, often littered with the detritus of human lives. The tight angle and slight distortion with which the works are framed, causes a sense of disorientation in the viewer, making it impossible to grasp senses of scale or context.

Like other painters of his generation such as Tomma Abts, Gillian Carnegie and Glenn Brown, Ling’s work reflects and exploits a tension between the represented image and its material construction through paint. Ling paints both in the open air and in the studio from constructed tableaux of everyday objects such as fruit, food, carrier bags and plastic boxes.

In Untitled (2013), Ling's subject is an anonymous shop font in an average street. The absence of signage, candy colours and warped perspective bring a sense of intense subjectivity to a nondescript scene. Ling draws our attention to the way in which our experience of the world is made specific by the way we move through it, his vision is more physical; as he puts it, ‘it is a question of how you see something, not what it is.’