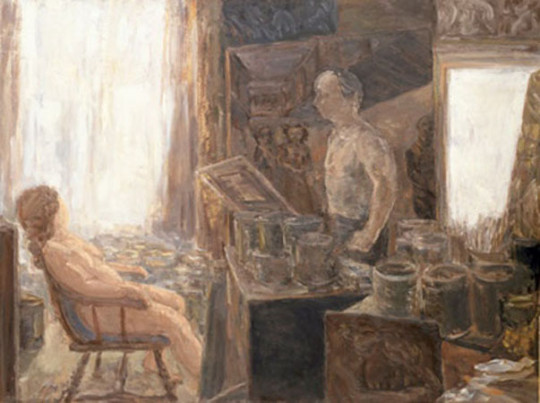 John Lessore was born in London, his father was the sculptor Frederick Lessore, his mother the painter Helen Lessore and his uncle the painter Walter Sickert. He was surrounded by art from infancy. His mother was an invaluable early teacher; though it was clear from the start he was going to be a painter. He attended Merchant Taylors School until the age of 16, when he was hospitalised for a year suffering from the paralysis which has since left him disabled. At 17, he entered the Slade where Thomas Monnington was a particularly important influence. In 1961 he was awarded an Abbey Minor Travelling Scholarship and went to Italy. He also travelled to France, where he met his French-born wife, and where he acquired a house. In 1965 he held his first exhibition at the Beaux-Arts Gallery in London (founded by his father, and from 1953, continued by his mother, whose single-mindedness in championing figurative artists such as Aitchison, Auerbach, Bacon, Camp and Uglow was legendary). In 1966, he started part-time teaching at the Royal Academy Schools and where he put into practice his belief in the necessity of teaching good life-drawing from a binocular rather than monocular approach, involving the study of volume, movement and anatomy.

The Proper Study, The British Council 1984