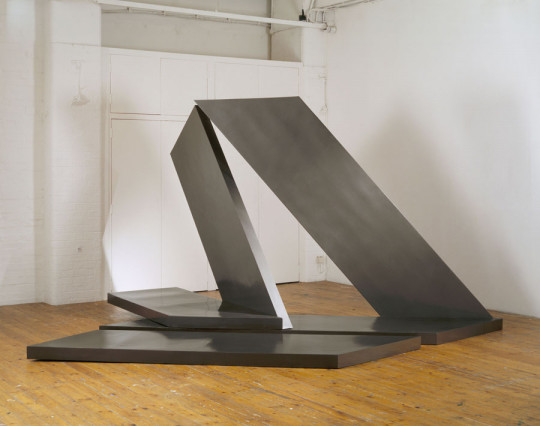 Phillip King was born in Kheredine, near Carthage in Tunis, and came to England in 1946. Following National Service, he spent a year in France later reading Modern Languages at Christ’s College, Cambridge and during this time he began to make sculpture. He then studied at St Martin’s School of Art, London, where Anthony Caro was teaching, and in 1959 he began teaching at St Martin’s himself and was to do so until 1978. He worked as an assistant to Henry Moore in the late 1950s, and from 1979 - 1980 was Professor of Sculpture at the Hochschule der Kunste, Berlin and Professor of Sculpture at the Royal College of Art, London. He received a CBE in 1974, was elected a Royal Academician in 1990 and made Professor Emeritus at the Royal College of Art in the same year. He was elected President of the Royal Academy of Arts in 2000. King began making abstract sculpture after a visit to Greece in 1960, and he was amongst the first British sculptors to use fibreglass as a medium. His works addresses the unseen aspects of things "the internal invisible going-ons behind the surface". King’s work has been characterised by his use of colour which he sees as the life-line into the invisible world "where feeling takes over from thinking and without the experience of which one’s senses would be false and diminished". He returned to making figurative sculpture in 1989 but has continued to make work on abstract themes. His work was shown alongside the painter Bridget Riley at the XXXIV Venice Biennale in 1968 and a major exhibition was shown at the Forti di Belvedere in Florence in 1997.