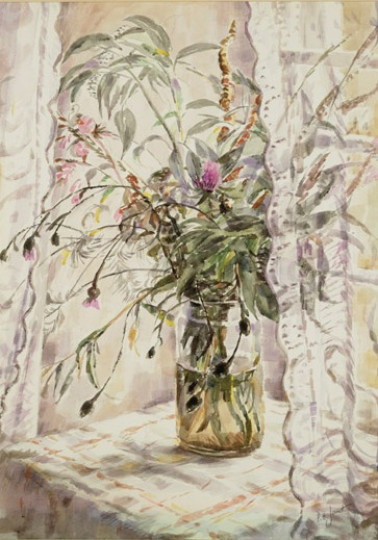 Percy Jowett was born in Halifax, Yorkshire. He studied at Leeds College of Art and the Royal College of Art in London. He taught for a time at Beckenham School of Art before serving in the Royal Garrison Artillery, seeing action in France and Flanders during World War I. In 1927 he was appointed Head of Chelsea School of Art, and in 1935 was appointed Principal of the Royal College of Art, where he gave the sculptor Henry Moore his first job. He first exhibited at the Royal Academy in 1907, and continued to exhibit there until the 1920s. He was invited by the printmaker Claude Flight to join the Seven & Five Group and exhibited alongside Paul Nash, Christopher Wood, Ben Nicholson, Henry Moore and Barbara Hepworth amongst other. The Group eventually became entirely abstract in character, and after this change Jowett and other figurative artists ceased to be members. He was elected a member of the New English Art Club. During World War II he served on the War Artists’ Advisory Committee alongside Kenneth Clark, then Director of the National Gallery. He was an outstanding teacher, remembered with affection by his students, and this has probably obscured his reputation as an artist.