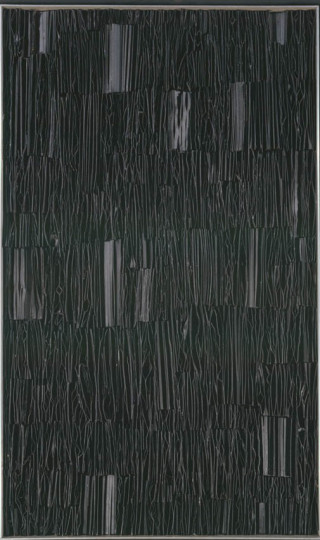 Irwin was born at Basingstoke, Hampshire, but grew up at Trebetherick, on the north Cornish coast. He was educated at Bryanston school in Dorset, where the painter Roger Hilton was briefly the art master, before going on to art school in London, first to Goldsmiths College and then, from 1951 until 1954, to the Central School at Holborn.
The 1950s were the crucial years in the development of later 20th-century modernism, and while many of Irwin's contemporaries fell under the growing influence of abstract expressionism and the New York School of Mark Rothko, Willem de Kooning, Jackson Pollock and the rest, Irwin, no less sympathetic to the abstract, was drawn rather more to the currency of the European avant-garde - to art brut, Tachisme, graffiti and the found image, and the continuing legacy of surrealism.
His bold abstract painting and collage works received critical acclaim, first coming to the public’s attention at the 1958 exhibition Three Collagists at the old ICA in Dover Street, London. His first solo show took place at Gimpel Fils in 1959 and he continued to exhibit internationally to glowing reviews at the Paris Biennale (1960) and the Venice Biennale, with Joe Tilson, Bernard Meadows and his old teacher Hilton, in 1964.
During the 1960’s Irwin taught at Corsham, Hornsey and Chelsea colleges and in 1969, he became head of fine art at Brighton College of Art, where he remained until 1984.
In his later years Gimpel Fils honored him with a retrospective (1987) and his works were included in major survey shows at Redfern Gallery, Barbican and Tate Britain in the late 90s.
He died in 2008 after a long battle with Alzheimer’s.
Source: The Guardian online