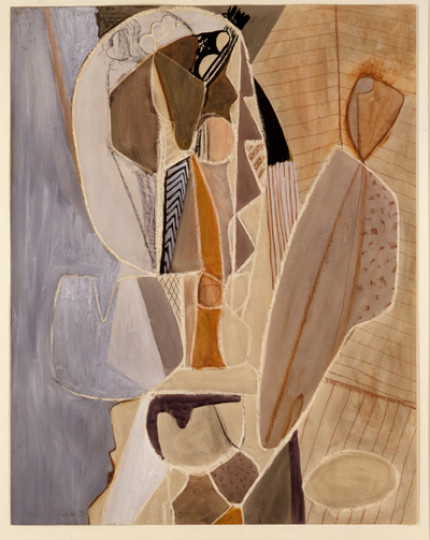 Until his work was shown at the Fine Art Society in 2005 Edgar Hubert was all but forgotten. He was born in Billingshurst in Sussex, the son of a doctor. After studying at Reading School of Art he took up a place at the Slade in London where his contemporaries included William Coldstream, Rodrigo Moynihan and Geoffrey Tibble, who became a life long friend. Hubert’s early work was figurative, much in the Slade tradition, and was shown at the New Burlington Galleries in 1930; he occasionally exhibition with the London Group. The Mayor Gallery mounted a one-man show in 1946. Ill health forced him to leave London in the late 1930s and move to Beaconsfield, where he lived in relative seclusion with his brother and his family. William Townsend (contemporary painter and commentator) describes Hubert in 1938 as ‘still painting abstract pictures … non-geometrical abstraction in black, white and grey, cloudy groupings of vague streaks and knots of dark paint, or loose clusters of starry shapes each a few painfully calculated flicks’(1). His work was included in the ICA’s exhibition Forty years of Modern Art shown in 1948 and in the British Council’s exhibition La Jeune Peinture en Grand Bretagne shown in Paris and Athens.

Hubert was deeply affected by the deaths of his father and brothers and remained in the family home until the death of his mother in the 1960s. He suffered from chronic shyness and introspection and lived the life of a recluse in Seaford, Sussex. The death of his friend and neighbour, Geoffrey Tibble, caused him to lose nearly all contact with the art world. However he continued to paint almost up to his death on 25 January 1985.