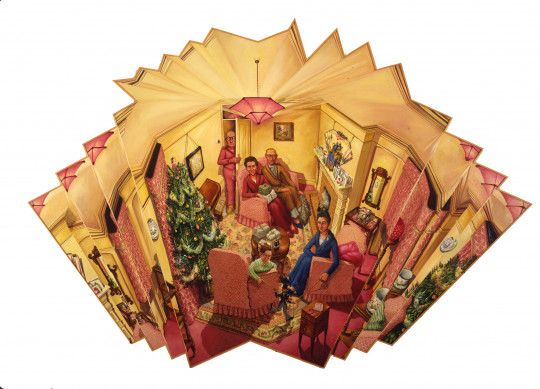 Anthony Green was born in London, the son of a tyre-merchant and his French (though English-born) wife. He studied at the Slade School of Fine Art in London, where he later taught. The greatest influence of Green’s schooldays was his art master Kyffin Williams. It was Williams who encouraged him to enter the Slade which he did at the age of 16, and where, Green said, the emphasis on drawing was paramount. It was also at the Slade that he met Mary - muse, mate, and matrix of all his ideas and aspirations. They married in 1961, after Green had spent a year in France on a government scholarship. France, like Mary, played a continuing role in his work. He first remembered it for the family holidays spent with his mother’s family; later for the impact it made on him by French painting - specially the huge 19th Century works of Gros, Geri Ault, Delacroix and Courbet. Marriage provided Green with a permanent subject matter ‘my family and its continuing story’. Green was elected an Associate Member of the Royal Academy in 1971 and, having won the Royal Academy Summer Exhibit of the Year in 1977, was elected a full Member. In 1991 he was elected a Fellow of University College London and in 1996 was shortlisted for the Jerwood Painting Prize. Green was appointed a trustee of the Royal Academy of Arts, London in 2000.