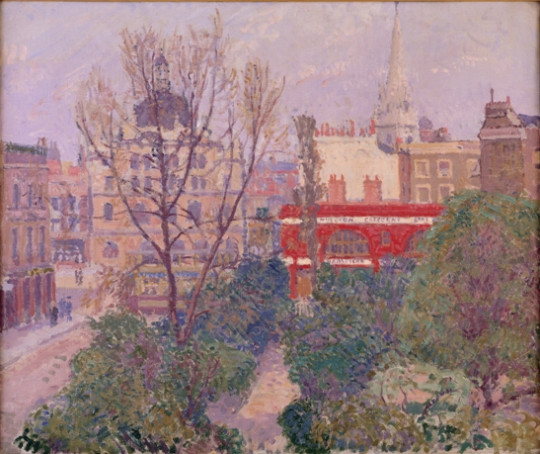 Spencer Gore was born Epsom, Surrey. He studied at the Slade School of Fine Art, London, before making several visit to France where he stayed with the painter, Walter Sickert. The two painters would work separately by day and meet in the evenings to discuss their work and their ideas for English art; Gore’s quite personal assimilation of French Impressionism and Post-Impressionism was to be reflected in his original use of colour. In 1905 he joined the Fitzroy Street circle of painters and under Sickert’s encouragement painted a series of London theatre interiors, characterised by increasingly strong contrasts of colour.

Despite a tendency to decorativeness, Gore’s painting retained an emphatic sense of design, due in part to his habit of working from small, well documented drawings. Many of Gore’s paintings during this period reflect his residence in and around Mornington Crescent (one of Camden Town’s principal thoroughfares), its gardens and street façades. In 1911 he became a founder member of the Camden Town Group. His landscape paintings of Hertfordshire and Richmond where he moved in 1913 became increasingly boldly designed and flattened. On 25 March 1914 while out painting he was caught in a storm and contracted pneumonia. Sadly, by 27 March, Gore, aged thirty five, was dead.