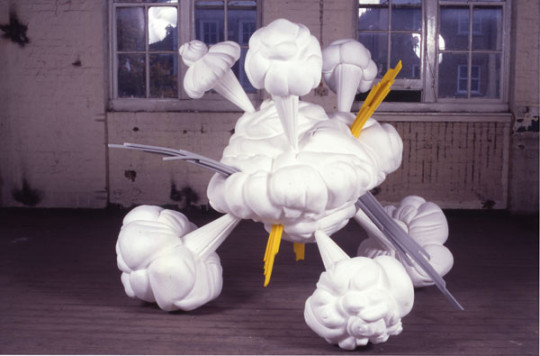 Matt Franks was born in Yorkshire in the north of England in 1970, and studied at Staffordshire University and at Goldsmiths College in London. He lives and works in London.

Matt Franks is one of a generation of British sculptors whose work is made from mass-produced industrial materials and everyday ephemera. He carves huge blocks of Styrofoam to produce humorous and bizarre works with a broad spectrum of references, from high art to pop culture. Franks described his work: " I'm always trying to let the imagery decide itself as I'm making the object so that the limitations of the material and the way I handle it - the clumsiness - kind of dictate the outcome. I may be looking at something by Bernini with lots of flowing hair and drapes and I'll translate that into this material. It's entirely appropriate in this material but you know through working with it and trying not to become too crafted and too fussy - I like to let things slip a bit, kind of deliberately. It's an approximation and plus I don't want to push the work into the realms where it's all about surface and perfection…. I decided to copy epic flash points that really only exist in time and space. Points that have no other existence, except in terms of film. So I made the mushroom clouds - that was all about using impoverished material to capture something that was momentous.

I'm always looking at painters and contemporary illustrations and graphic design and just lifting bits out of that. So it's a little bit cannibalistic because a lot of the designers - graphic designers, illustrators - they're all borrowing from the fine art tradition and vice versa, so there's this swapping going over and I'm kind of taking from that crossover that's happening there. Since my sources are mainly two-dimensional, or at least taken from reproductions, changing them into the three-dimensional brings them into the real world. Effectively, it comes back to my own interpretation of these images - twisting them slightly so they become more my own, but also a kind of idiosyncratic way that people recognise. An eccentricity of some kind - maybe an obsession."