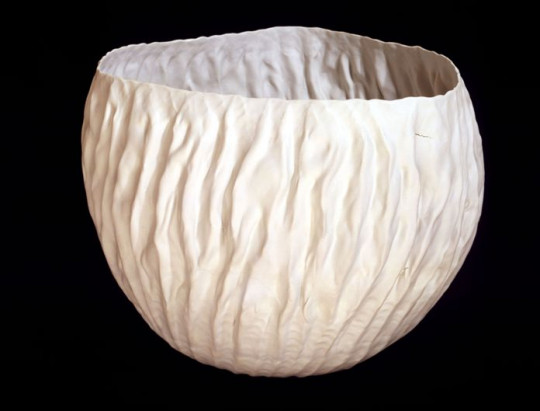 Fisher was born in 1973 and brought up in Norfolk. He took the Foundation at Norwich School of Art and after a false start studying ceramics at Bath Academy of Art he moved to London and graduated in Ceramics at Camberwell College of Art and Design in 1997. He went on to study Ceramics at the Royal College of Art from 1997-1999. During his MA course he also worked as an architectural technician.

Fisher creates large pots – some so big that they can be described as monumental - on a wheel but he then manipulates the porcelain (hung upside down) to paper-like folded fragile thinness. The finished work looks spontaneous but is the product of long and careful working. The porcelain pieces are unglazed but sometimes he uses slips to lubricate his work as gravity makes it thinner and more transparent. He also uses a similar technique using raw glazed stoneware to produce opaque and heavier rippling pieces.

Fisher has work is in many public collections notably The Henry Moore Foundation, Musée National de Ceramique, Sevres, the Museum of Arts and Design, New York, and the Victoria and Albert Museum, London.