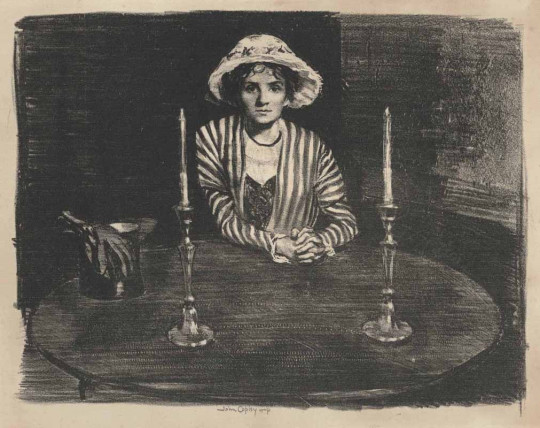 Copley was a prolific painter and printmaker. Born in Manchester, he studied at the local art school and later at the Royal Academy Schools in London. He took up lithography and was a founder member of the Senefelder Club, formed to promote lithography as a fine art medium. He married the artist Ethel Gabain, who was one of the few women of her generation to be able to make a living as a lithographer (she also made a niche for herself as a portraitist of women), and together they travelled extensively in Italy, which inspired much of their finest work. This portrait is of Ethel Gabain at the age of 31, on the eve of the First World War. Gabain was commissioned to paint a series of works during the war, notably on the Women’s Voluntary Service, and on the theme of evacuation. Copley was awarded a prize at the First International Exhibition of Lithography and Wood Engraving at the Art Institute of Chicago in 1929/30