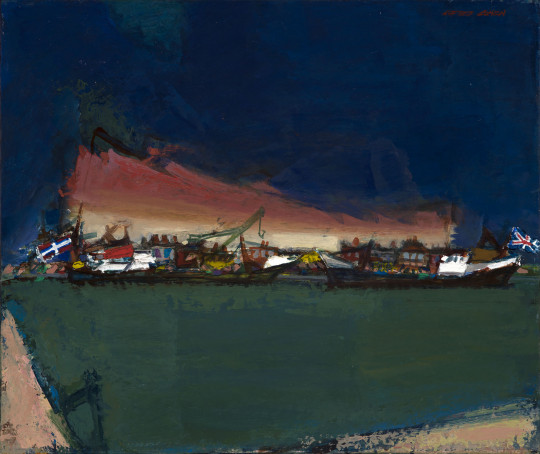 Alfred Cohen was born in Chicago in 1920 to Latvian émigrés. After initially attending the Art Institute of Chicago, Cohen served in the US Air Force following the outbreak of the Second World War. As a committed Europhile, Cohen hoped to be posted to Europe; he remained on home soil, however, but would later get his chance to move to France in 1949, travelling the continent extensively for the rest of his life. In doing so, he met and socialised with many famous European figures of the post-war period, including Anthony Quinn, Ernest Hemingway, C. F. MacIntyre and Ingrid Bergman.

Distanced, aerial viewpoints and a distorted, warping sense of movement characterise Cohen’s paintings, perhaps an echo of his former experiences in the Air Force. But despite this removed perspective, Cohen's work captures a vivid sense of place, as seen in his recurring images of waterways, shop fronts and domestic interiors. Using slabs of colour almost like a sculptor in impasto, Cohen's use of vibrant colour and erratic brushstrokes create a vibrancy that borders on the grotesque, which also references Cohen's sustained preoccupation with Commedia dell'Arte.