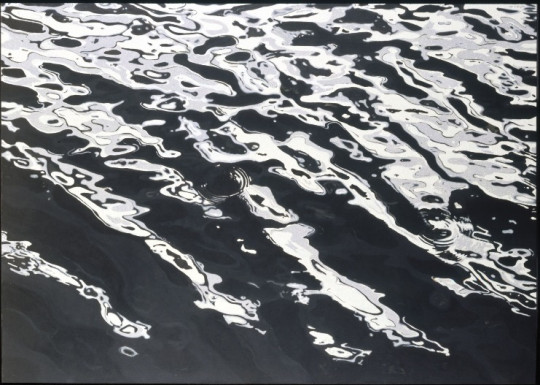 Kate Bright was born in Suffolk and studied at Camberwell School of Art and Goldsmith’s College of Art, both in London. In 2001 she was included in the British Council exhibition Tailsliding and in an interview with Stephen Hepworth she described her work:
"We don't go skiing anymore, we go snowboarding. It’s a more glamorous adrenaline fuelled extension of our urban experience. The rural encounter with nature is where we escape the urban. My street is empty of cars at the weekend, because everyone leaves London. The way that we live here is quite de-humanising, so to escape to the country is an obvious need that people have. Whether it’s to Basildon or a little cottage in the middle of nowhere - which would be nice. The important thing is that it’s away. I don't do this often, so perhaps I’m trying to tap into the desire all of us have to escape somewhere. Funnily, coming to a studio would be an escape for many people. A Sunday afternoon landscape painter would be very happy here in my studio on top of a primary school in Islington.

The glitter, from the moment I picked it up, was screaming to be sunshine on water. It was like water in my hand. I earnestly want to capture that in a painting. In a way, it’s about the impossible notion of possessing the sublime. I seem to be trying to make these contemporary landscape paintings that aren’t really to do with anything that has been done in landscape painting before. Apart perhaps, from Christmas cards painted by people with their feet, which unfortunately, you can't find anymore. There is always this thing with glitter, all the references to kitsch and camp, which those Christmas cards had. But at the same time they are genuinely endearing, in an ‘old lady-ish’ way. There is a sweetness to them. As a kid it became the Christmas card, loosely painted with a splash of glitter on, the epitome of Christmas.

But in my work, the same language doesn’t apply. This is always something I have to mention about my work - that it's not about kitsch or irony. It's completely… I want to say heartfelt, but heartfelt is still so kitsch. Perhaps they are romantic, or dare I say genuine. Irony is like saying ‘look at me, I am crying, but not really. These are not real tears, I am being quite clever (fake crying) and you have to pat me on the back for that’! But the paintings are not like that at all. They try to be like beautiful mountains and lovely sunshine on water. They really are trying to be like that. I know they don't really achieve it, they are never quite what I want them to be. I have this idea in my head that I want them to be a certain way and something happens in the process so they end up different. Have I failed or not? They surprise you. Or perhaps I surprise myself. I was always thinking that my paintings might be seen as someone painting in vain. Is it impossible to capture that moment when, awe struck, you witness some natural phenomena?

Why is it that in tv showrooms, those banks of televisions look their best when they are showing nature - lush jungles, glistening seascapes? Is it because they’re exotic and we don't know what they really look like? If it were football on the TV, you would be watching the players, the game and not thinking about how green the grass is. There's no narrative. Images of nature on tv don't need sound to enchant us. Perhaps that’s because we are not experiencing it. We’re on our sofas, not getting wet or cold. The images have been cropped and edited, distilled to that perfect thing. We all have that romantic ideal of a wave breaking. It’s the point at which the image becomes fixed, distilled, and translated. A crystallisation of an experience. My paintings of breaking waves have polystyrene balls stuck all over their surface to represent the bubbly froth. To catch this kind of moment of extreme transience as the wave breaks.

Somehow, photographs fail you. If you see a beautiful sunset you reach for your camera and take a photo as a souvenir of that moment. You take it to the chemist, get it processed. The photo comes back and it’s nothing like the thrill of experience or the look of the moment. You’re left with a yellow circle in a grey mist. However when you find a postcard of such moments, like the Eiffel Tower with the perfect sunset behind, it is a combination of a number of experiences and expectations that come together. Behind every generic image is a cliché and behind every kind of grand gesture there's always going to be failure. In Australia, painters try to capture its huge expanse and in a sense they are absolutely destined to fail, or at least destined to fall into clichés.

I use glitter to make the paintings better than I could ever paint them. I couldn't do that sparkling business with just ordinary paint, and certainly not acrylic. I'm not that good, no one is. I think about Richter's paintings of the sea, they are dead in a way, they’re very Northern European. Hockney's splashes, are just flat. While Vija Clemins drawings are fantastic, there is nothing sparkling or inspirational about them. They are exactly what the sea looks like seen from a ferry! Are we just impressed by painters who have learnt their craft like the photo-realists? I’m bored with photo-realism. It’s like a party piece. There are people who paint exquisite images, which are so empty that it’s scary.

You are constantly reminded with the application of glitter that the painting is a surface. It's not an illusion. You're not allowed to get lost in it. But you get lost in a different way. They aspire to be the perfect moment and of course the perfect moment is manufactured from various elements and therefore is unreal. Glitter and polystyrene balls while synthetic, are great mimics. Heightened by the application across the surface, these elements don't recede. When you walk up to the paintings the illusion is lost and they break down into their component parts. They amplify the fact that perfect moments are unreal. The animation ceases, what up to that point has been beautiful, becomes stilled. The identity of these materials has never been hidden. They sustain the aspirations of the paintings rather than fracture them. The paintings have a life of their own."