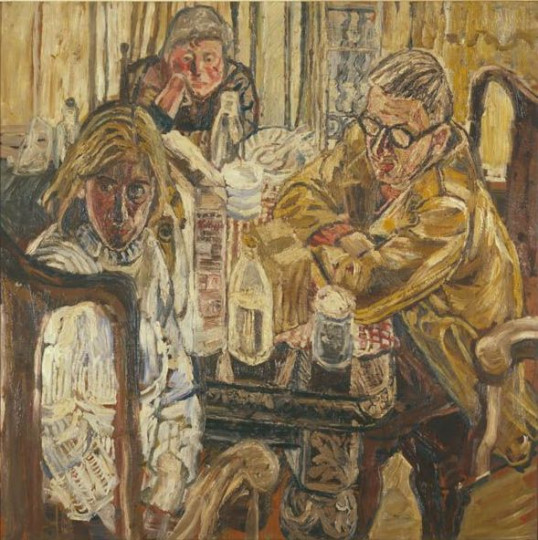 John Bratby was born in Wimbledon in London. An ex-serviceman’s grant enabled him to study at Kingston School of Art. He failed the intermediate exams and his grant was withdrawn so he supported himself by working in factories.

He later studied at the Royal College of Art in London, spending time in the Mural Schools. While still a student he had his first solo exhibition at the Beaux Arts Gallery in London (the gallery was run by Helen Lessore, related by marriage to the painter Walter Sickert).

Bratby and his fellow students Derrick Greaves, Jack Smith and Edward Middleditch were dubbed the Beaux Arts Quartet or ‘The Kitchen Sink School’, a term evolved from a now infamous article by David Sylvester in Encounter (1954).

Bratby won a travel scholarship and spent an unhappy six months in Rome; his novel Breakdown was based on this experience and published in 1960.

He exhibited in the British Pavilion at the XXVIII Venice Biennale in 1956 whilst still teaching at the Royal College of Art. His paintings were used in the film of Joyce Carey’s novel The Horse’s Mouth released in 1958, the same year he retired from teaching.