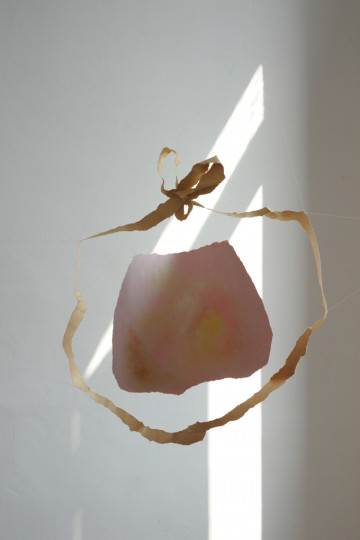 Karla Black was born in Alexandria, Scotland and studied Fine Art and Philosophy at Glasgow School of Art.

Her work prioritises material experience over language as a way to learn about and understand the world. Her sculptures are rooted in Kleinian psychoanalysis, and in formlessness as it has been understood at specific moments in art history. Inherent in the work is also a lively interest in recent scientific theories about the behaviour of the material world – in particular developments in physics that show how, at quantum level, a particle can be in two places at once. Only when the particle is observed does it settle for a single position. Karla Black is captivated by the idea of the quantum world as a world of possibilities where nothing has yet decided what it is or what it will do.

Black represented Scotland at the Venice Biennale in 2011 and created an installation of brand new ‘almost objects’ which hovered between energy and mass in the eight rooms of the Palazzo Pisani (S. Marina). She worked in a rage of ephemeral materials that have become the hallmarks of her practice, including Vaseline and marble dust, sugar paper and eye-shadow, soil, powder paint and plaster, polythene, cellophane and soap, in crumbling, peeling washes or dustings of high key mid-colours like peach, baby blue and pastel pink.

Black was shortlisted for the Turner Prize in 2011.

She lives and works in Glasgow.