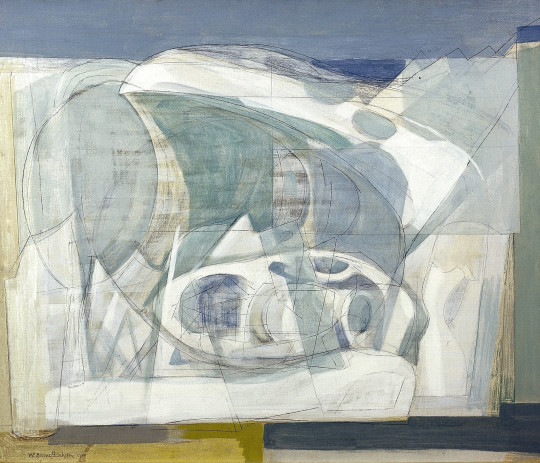 Wilhelmina Barns-Graham was born in Fife, Scotland. She studied at Edinburgh College of Art; but suffering from poor health, she was recommended by the enlightened principal, Hubert Wellington, to go to St Ives for the sake of her health and her art. St Ives had become a kind of wartime haven for artists and intellectuals, chief among those were Naum Gabo, Barbara Hepworth and Ben Nicholson - the latter took a great interest in her work, driving her round the landscape of West Penwith. During the war she worked in a factory making camouflage nets and stayed on in St Ives when World War II ended. She was actively involved in the St Ives art world, where she was a member of the Newlyn Society of Artists, the Crypt Group (so called because of the group, which included the painters Peter Lanyon, John Wells and Bryan Wynter, exhibited their work around the font in the crypt of the Mariners’ Church in St Ives), and became a founder member of the Penwith Society. The modernist art of these St Ives artists had a distinctive look based on the landscape and light of Cornwall and the non-objective views of the Abstraction/Creation Group in Europe. Her work was based on fine draughtsmanship. The drawings were mostly made on the spot but some, she recalled, came from memory: "they weren’t purely abstract but they were abstractions in so far as they were based on an experience". Following an inheritance from an aunt Barns-Graham acquired a property in Scotland and something of the Celtic freedom of expression began to creep into her later work freeing her compositions and warming her palette of colours.